Shop Around:  An Interview with Jaime Ladet of Hustle n Bustle.


With the playful charms of Charlie Chaplin and the seductive eyes of Theda Bara, Jaime Ladet is a modern gamine plucked out of a Western/science fiction/fantasy movie.  An artist and crafter, photographer, musician and beekeeper.  A fire performer with one foot planted firmly in Vaudeville, the other in a neotribal circus.  She is a gypsy weaving between eras. She thrives in this one, but there’s no question her heart lies in days gone by.  This blend of styles and eccentric personality is what sets her accessory line, Hustle n Bustle, apart from the rest.  I was lucky enough to steal a bit of her time this week to share with you. 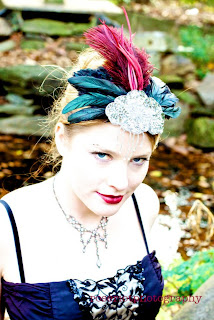 Photo by Rose Riot Photography
Want to read more? Click here ------> ATLRetro
Posted by Queen of Your Distraction at 5:05 PM No comments:

So, I'm on day five of my partially paleo diet.  I say partially because I'm not giving up alcohol and I am still eating some dairy.  I'm also not going to worry about whether a cashew is the seed or the fruit of the nut.  I'm just going to eat it and love it!  I'm more concerned with ridding my diet of unnecessary sugars and grains.  Those of you who are frothing at the mouth to say, "Alcohol has the most unnecessary sugar, blah, blah..." can save it for someone who cares.  I'm talking about fake sweeteners and breaking my addiction to sugar and wheat.

It has been surprisingly easy.  The first meal was only a half failure and still managed to be tasty and SUPER filling.  The rest have been really lovely experiences.  I had forgotten how much I love spending time in the kitchen.  I even lost three pounds.  Not bad.  The worst part has been giving up whiskey.  I am a Jameson gal through and through.  Unfortunately, whiskey is high in sugar.  The alternatives, according to most blogs I've read, are tequila and vodka.  Trying to drink tequila was a waste of time.  I'm acclimating to vodka.  It's not my favorite, but it will do for now.  I love water.  I drink a lot of it, but sometimes I want something with a little oomph.  Sparkling water?  Okay.  I'll try it.  I hate it!  Who knew water could taste so terrible?!  I can't understand why.  Still, I'm trying.  The coconut and the grapefruit LaCroix seem to be the most tolerable for me. 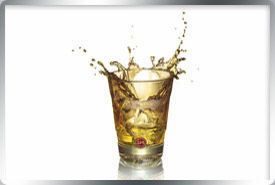 Like many, I have been eating far too many processed foods high in sodium and other nasties.  I need more organic fruits, vegetables, and meats.  Off to the kitchen I go!  I'm a good cook, but baking has never been my forte.  Still, I cannot resist it's call.  My first attempt was a McSOG breakfast sandwich from the Son of Grok blog.  Another great find thanks to Pinterest and it's many pinners.

One of the first ingredients in a McSOG is ground unsweetened coconut flakes.  Toss a half cup of this in a food processor and it becomes the flour for the griddle cakes.  As I said in previous posts my kitchen is very sad right now.  All of my appliances and handy tools are packed away in storage.  Knowing I'll be without them for awhile I went ahead and ordered almond and coconut flour from NutsOnline.com.  Well, of course the measurement was for coconut flakes and not flour, so I tried to figure it out on my own.  Not the best attempt.  The griddle cake was extremely dry.  It barely held together when "wet".  When I flipped them they pretty much crumbled in the pan.  Fail.  I got two of them to hold together with a touch of sour cream.  They came out much like my pancakes do: half cooked and somewhat burned.  Yay.  Moving on...

I had precooked my bacon in the oven that morning and microwaved an egg while my griddle cakes, um... cooked.  I assembled my sandwich and dug in.  It was good... kind of.  The griddle cakes were weird, but that was my fault.  I think the sour cream thought it was the star of that show.  The bacon and egg certainly helped hide the odd flavor.  The cakes were so dense that I could only eat half of one.  That turned out to be just fine and I was quite full for most of the day.

If you'd like to try the recipe simply click the highlighted McSOG link above.  I'd love to hear your experiences.  I doubt I'll be trying this one again due to my flour faux pas.  It literally left a sour taste in my mouth.  If I want a breakfast sandwich again I will try the grain-free biscuit from Food Renegade. 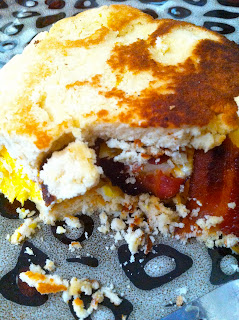 Posted by Queen of Your Distraction at 4:12 PM No comments:

Queen of Your Distraction
Curator of Curios at Diamond*Star*Halo, High Priestess at the Baphomettes, Siren at Atlanta Mermaid Brigade and Coordinator of Cotton Candy Colored Chaos at Blast-Off Burlesque.